The results can be seen by clicking HERE

That was a good turnout on Tuesday, and with the bonus of a few locals recruited by Seb and Ellie, hope everyone enjoyed the orienteering. We certainly chose a good evening for it, weather seriously downhill by Wednesday afternoon.

As hoped, Darnick made quite a good venue for a Sprint and I was pleased at how competitive the event was, with no fewer than four runners holding the lead at one point. Somehow I lost the symbol for a narrow path on the new map, but half an hour with a strimmer made them a bit more obvious. Well done to Tim for coming through to win. Thanks again also to the Darlow family for generously providing a venue for the prizegiving, and to Ian for doing the maths and arranging the prizes.

Maybe a night sprint at Shunter’s Wud next winter when the vegetation has died down?

Thanks very much to Duncan for coming to the rescue and putting the results and splits on the website – that was way beyond my computing skills!

Thanks again all for coming

Provisional Results from today’s event on Bowhilll are HERE.Thank you to everyone who came along to Bowhill today and encountered four seasons in a day. The hail and snow in the middle of the event was a bit of surprise and caused the non-waterproof maps on the Green course to run a bit.. We also realise there were a few problems with missing kites, which in turn meant that one control unit was placed slightly off position on the small bit of fencing in the hope that it would be more clearly visible. Eb Rooney’s Planner’s Report is now included below.

I have left the results unchanged, but everyone can see their times for all the controls.

There were a few challenges for organisers and competitors today with mislaid rucksacks (containing kites), forgotten Download boxes (delivered by the cavalry just in time for the early Downloads), lost glasses somewhere in the forest and ink running on the extra non-waterproof green maps during the snow.

Despite the weather and the technical issues, there was a lot of positive feedback at the finish and download. We hope to see you all at future Roxburgh Reivers events.

Eb Rooney says: This event was meant to happen last October, but got postponed because of forecast high winds and heavy rain.  This morning it looked like we were in for a bit of a treat, with pleasant spring sunshine and the prospect of some lovely running through the woods.   Then the snow started….

Originally I had planned three courses (Yellow, Orange and Light Green) but with the East of Scotland juniors descending on Bowhill for a training event we decided to add a Green course at the last minute.  This meant more controls than usual, and a slight problem with having enough flags to go round, which we probably could have coped with if I hadn’t left my rucsac halfway up the hill while I was setting up.  The result was that some of the controls had to be placed with no flag and were less than easy to find – particularly in the snow!  Apologies for that.  I also underestimated how many runners might want to do the Green;  I had printed some extra maps on ordinary paper just in case, and we probably would have got away with this if the snow hadn’t started just as the last waterproof map was handed out…

Fortunately for me orienteers are a hardy and forgiving lot, and everyone seemed to have enjoyed their day despite these challenges.  I certainly enjoyed the planning, and seeing so many people having a go.  The addition of the Green gave the opportunity to take runners into areas I’d not used before, and to introduce some options for route choice which generally seemed to work.

Thanks to Robin for help with the planning and course design and for acting as Controller, Duncan for handling registration and download and coping with all the various challenges of the day, Rob for setting up, Ian, James, Robin and Rob for collecting in controls, Lindsey for setting up the laptop, Paul McGreal of Durty Events for the loan of extra controls, and Buccleuch Estates for permission to run the event at Bowhill.  Thanks also to those competitors who stopped to help one of the runners who had lost his glasses at a crucial point in the course – the friendly spirit of orienteering at its best!

The results can be seen here

Thanks to Fiona for organising an enjoyable event.

Congratulations to Mike Johnston and Seb Darlow who won the Sprint and the Yellow courses respectively. Unfortunately Ian didn’t manage to fix it so he won!

Next event will be at Jedburgh Grammar School next Wednesday evening.

Latest Standings can be seen here

A new area for orienteering this evening. Thanks to everyone involved in the planning and organisation.

John Tullie has asked to be treated as non-competitive runner, but his performance is till included for comparative purposes.

The results can be found here

The next event will be at Gordon next Tuesday.

The full results are HERE

League table based on best aggregate of three scores to date is shown below. END_OF_DOCUMENT_TOKEN_TO_BE_REPLACED

Jedburgh Abbey formed the backdrop for registration and download as Ian Maxwell gave us an enjoyable challenge on the pavements and footpaths along side the Jed Water.

The full results are HERE

It was a good night for the Heger family with Marc just pipping Patrick for the top spot by 12 seconds.

There were lots of younger members and guests today. Pride of place goes to Elspeth Sloan running as a W4 and impressing her World Master grandad with an excellent time for her age.

At least one of the local residents forgot their local knowledge around the swimming pool and ended up on the wrong side of the A68 when looking for control number 7.

The League table below is based on taking the aggregate of the best two results from three. I think this gives a more accurate view of potential final standings than adding all three scores together. Focusing on the best two keeps Ian Maxwell in the lead, just ahead of Marc and Patrick. 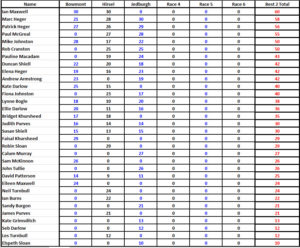 You can enlarge the table by clicking on it.

Next week’s event is at Selkirk Hill, planned by Fiona Johnston – park at the Argus Centre. Start times are from 6pm as usual.