One of the highlights of the orienteering season are the Scottish Championships, two days of individual and then relay competitions, this years event being held north Perthshire last weekend.

The individual race took place in glorious sunshine just north of House of Bruar in a mixed area of woodland and open hillside and with Roxburgh Reivers being part of the organising team they had to juggle their runs with operating one of the Starts. The event was also a Scottish Veterans team selection event so competition was tight but Reivers were delighted to get three members on the podium. Fiona Forrest won W40L by over a minute and Lindsey Knox took the W55L Scottish title by slightly under a minute. Rob Cranston finished 3rd overall but 2nd Scot on M45S.

On Sunday the weather had deteriorated to dull with regular heavy downpours so the club were glad of the club shelter for the Relay Championships at Dunkeld. With additional members travelling up from the Borders for the day, there were 3 teams entered including a squad of under-16’s competing in their first orienteering relay event. Whilst not finishing on the podium all the boys did well and gained experience for future runs. Faisal Khursheed in particular had a good run, running an adult course and finishing in 4th position. The club senior team of Pauline McAdam, Lindsey Knox and Ian Maxwell won their handicap age class and were placed 4th overall.

This weekend sees a large number of Reivers doing a raid over the border to Northumberland for the British Championships. 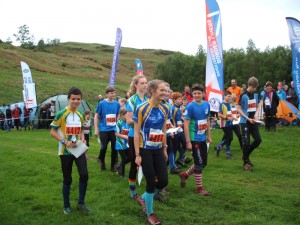 Patrick – 3rd from left in blue top at start of relay race. 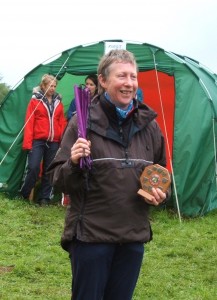