Robin Sloan is the new M70 World Champion after a thrilling Long Distance Race in a damp Woodhill Forest, near Auckland.  After two qualifying races Robin was seeded 8th in the final and managed to keep his head while the 7 seeded above him lost their’s.  Robin took the lead towards the end of the course and finished 10 seconds in front of the silver medalist. The result made up for a slightly disappointing Sprint Final when he missed a medal by a mere 3 seconds.  Well done Robin. The photo below is of the three GB medalists – David May M70 Silver, Robin, Nick Barrable M40 Silver. 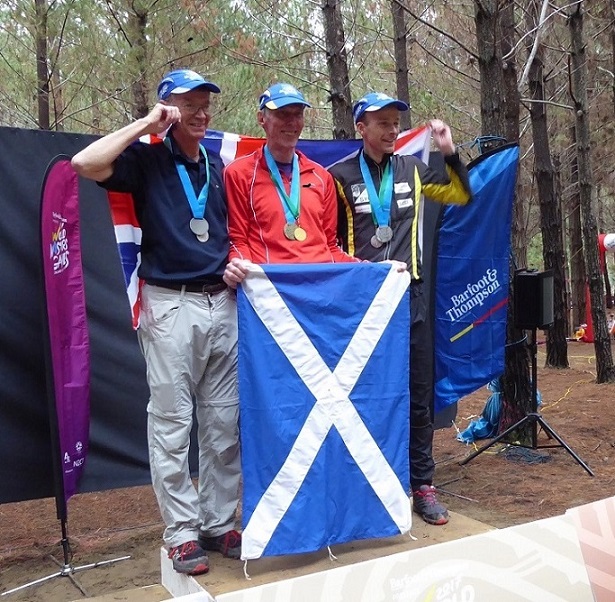 Of the other 3 Reivers ?   All 3 were reasonably happy with their Sprint races before things got much more tricky in the forested sandunes of the long distance races.  Douglas didn’t travel to the Final due to a very sore back, Rob got his monies worth in the tricky terrain, and Lindsey managed to qualify for the A Final despite a turned ankle but an upset stomach in the Final scuppered her run.

The whole World Masters experience was great (despite the problems mentioned above).  Douglas organised a group meal one night which involved a ferry across Auckland Bay.  The sprint qualification race was extremely tricky, the sprint final was less tricky until a sting in the tail on different levels, all three long races were in lovely undulating and runnable woodland – the danger was running too fast.  We all had different goals and in the main we weren’t too far off those.  After a week of glorious sunny weather we were unfortunate to have rain for the Final day.